Solar researchers are testing thermal energy storage in stacked ceramic magnesia bricks – using a liquid metal; sodium, as heat transfer fluid. The magnesia bricks will be held in a packed bed in a single storage tank; so it will contain the liquid sodium in both its hot and “cooled” (150°C) state utilizing thermocline storage. 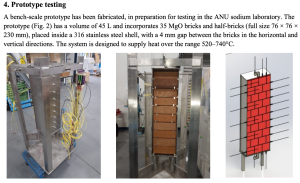 Prototype test of magnesia bricks in the sodium lab at bench-top scale, funded by ASTRI. Image@Development of a Packed Bed Thermal Energy Storage Prototype with Sodium as the Heat Transfer Fluid

The need to store energy didn’t just become an issue with today’s renewable energy. Gas has always been stored in vast underground caverns. Oil is stored in huge underground tanks and national petroleum reserves. Coal is piled outside power stations or waits aboard train cars that slowly move across continents.

Storage is needed for the electric grid. In CSP, the thermal form of solar power, storage is thermal; in hot molten salts. These transfer heat and store it too at about 560°C. This kind of solar uses a thermal power station to generate electricity from steam, like a coal or nuclear plant. These steam turbine systems only need a temperature of around 400°C.

Energy storage is essential to decarbonize heavy industry with solar

Now, storage is even more crucial as concentrated solar power (CST) begins to replace burning fossil fuels for supplying heat for industrial processes. These processes must run round the clock, at higher temperatures from 800°C and up, summer and winter.

To attain higher temperatures, CST researchers are looking into new technologies to transfer heat and keep it hot. One way is to split the task between two materials. A fluid best suited to transferring high temperatures can heat a solid material best able to store the heat.

For this reason, researchers in the CST field are investigating heat transfer fluids and thermal storage materials that work well together and can attain higher temperatures.

A team at Australian National University (ANU) proposes testing a novel combination. Their paper, Development of a Packed Bed Thermal Energy Storage Prototype with Sodium as the Heat Transfer Fluid and a SolarPACES2022 presentation describes their work.

Why liquid sodium and magnesia bricks

They are trying liquid sodium as the heat transfer fluid and storing the heat in bricks of low-cost commercial-grade magnesia, which as a ceramic can absorb and hold heat better than most rocks. Sodium has a working range between 100°C to 800°C, much hotter and a much wider working range than molten salts (290°C to 565°C).

“So sodium is potentially a very interesting fluid for high-temperature systems because of its high-temperature capability, and wide liquid range,” said lead author Joe Coventry, Associate Professor at ANU. “And the magnesia bricks have good thermodynamic stability in contact with sodium at 750°C. Plus they are just a very standard commercial product used as a refractory liner in steelmaking. You can buy them in bulk. No worries at all for supply.”

Following their modeling in FactSage identifying the promising ceramic; magnesia, the team built a bench-scale prototype in the university’s sodium laboratory. Here it will test the accuracy of simulations of the performance of this packed bed system.

What is packed bed storage?

Locating the best ceramics for packed beds with liquid metals for the heat transfer fluid is another area of high-temperature research interest, for example at the Liquid Metal Laboratory at Karlsruhe Institute of Technology (KIT), led by Klarissa Niedermeier.

“The team at KIT did some of the early work modeling packed bed storage with sodium,” Coventry noted. “However, I don’t think they got to the point where they had identified and tested a particular ceramic as a packed bed storage material compatible with sodium. So we’ve done that. I think we’re the first to build a prototype with a suitable low-cost bulk storage material compatible with sodium that we think might be suitable for commercial application”

By using the magnesia in the form of bricks, they have proposed a tightly packed configuration that lends itself to mass production with a readily available product. In most packed bed systems made up of a loosely filled pile of rocks or round pebbles, there is a potential issue where through successive thermal cycles the materials tend to push outwards, stressing container walls.

Structured packing of bricks eliminates ratcheting as the bricks remain supported by each other. ANU has also tested exposing magnesia to 750°C for periods up to 500 hours and confirmed its stability at high temperatures. No phase change or structural damage has been observed.

The high-temperature advantage of sodium was identified long ago. In advanced nuclear a sodium-cooled fast reactor uses liquid metal sodium as a coolant. But after a leak caused a fire at Spain’s Plataforma Solar de Almería (PSA) outdoor test center in the very early days of solar research, this sodium research was abandoned.

Then with the recent rise in interest in high-temperature solar processes, sodium started getting research traction again. In Australia, Vast Solar is using sodium as the heat transfer fluid instead of molten salts in its CSP planned at Port Augusta. This modular plant has heat transfer fluid in multiple tower receivers heated by solar fields in series.

“Vast Solar is most interested in sodium because enables that modularity,” Coventry explained. “Sodium can interconnect each of their towers and transfer the heat back to a central power block. Molten salt couldn’t traverse multiple solar fields like that because it’s just too liable to freeze.” (Molten salt is a watery liquid at its operating range between 565C and 290C. But it becomes solid and immovable “freezes” at the lower temperature)

The way that the team mitigates sodium’s risk of fire (as well as the cost, which is higher than some other candidates) is to minimize the amount they use. In most packed bed storage systems, the pile of rocks can have large gaps for the heat transfer fluid to flow through. With rectangular bricks, there are just narrow gaps between each one. “So the sodium flows through the gaps between the bricks and that way we can expect to get well below 5% of the total volume being sodium,” Coventry explained.

Sodium is relatively expensive. So using as little as possible also makes sense. But will such a small amount of heat transfer fluid be effective in absorbing enough heat in the solar receiver and transferring it to the thermal storage materials? In this test, they hope to find out. 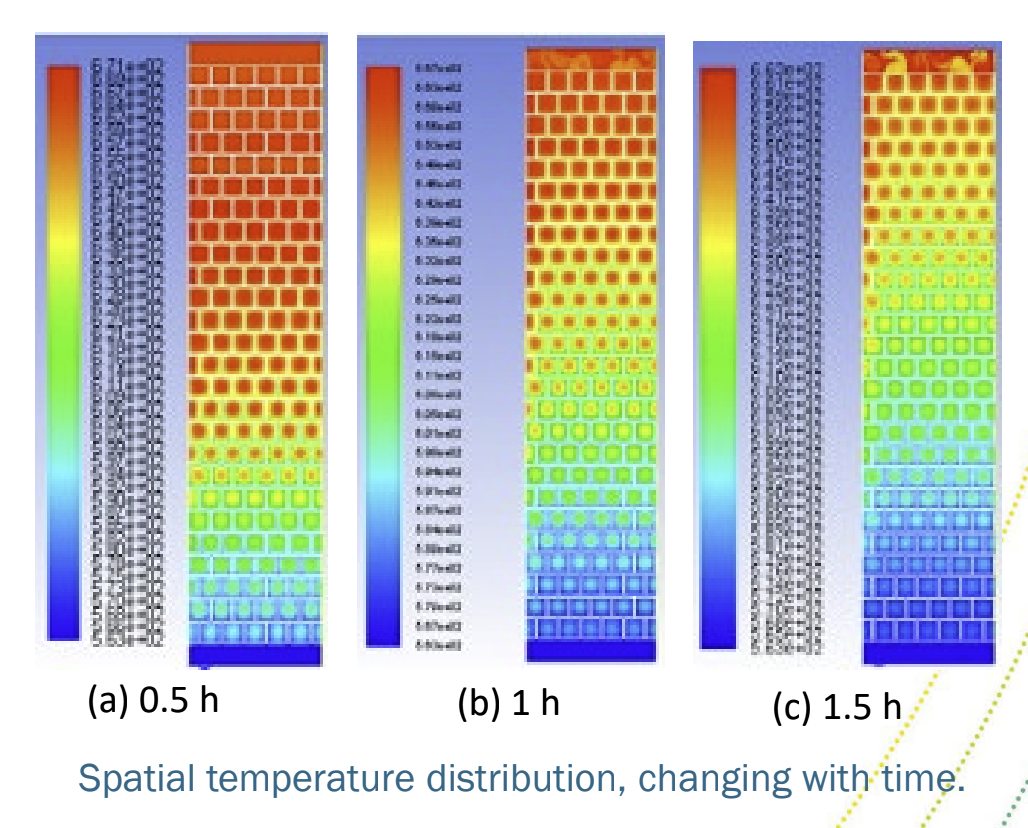 Like the Karlsruhe investigation of high-temperature storage with liquid metals with other ceramic materials, this test will be in thermocline storage; where both hot and cold are held in the same tank. Thermocline refers to that mixed temperature region where a warm upper layer meets a colder under layer. In thermal storage, it needs to be as small as possible, which takes some engineering. But a thermocline system is more cost-effective than having two tanks, one hot and one cold, as in practice one of them is empty at any time, which wastes storage material costs.

“We do a lot of work these days with HILTCRC, Australia’s low carbon transition initiative for heavy industry. They’re interested in quite high temperatures up to 1200°C,” he added.

“When heat is what you want, storing heat in things like packed beds is a lot cheaper than storing electricity and then converting it back to heat. Packed beds are quite simple in operation and I think that’s attractive for industry. So we’re looking to do quite a bit of work in the delivery of heat to our large industrial processes. Alumina refining, cement making, hydrogen-reduction or iron ore, and various associated industries; ”