While most countries are quietly ignoring thermal storage, China seems to be plowing its own furrow, and continues to toy with thermal technologies, in particular molten salt.

Most molten-salt thermal storage in the west has been powered by concentrated solar power (CSP) projects – 50 MW to 100 MW mirror arrays and until recently China also did this, but now is building dozens alongside GW-scale photovoltaic capacity in its northern deserts. Last week something very different was commissioned – a small molten-salt thermal energy storage unit to be powered by excess wind and photovoltaic electricity. 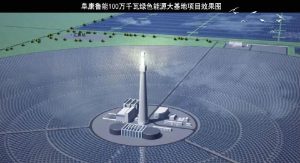 This energy storage unit, a $28 million, occupying ten acres, was built in Zhejiang Province, which is south of Shanghai and is completely unsuited for CSP – the climate is humid and often cloudy. Developer Zhejiang Tiansheng Holding Group states the power will go to local industries – chemical, printing and dyeing for the most part. This only works because most of that power is required as heat, not as electricity, otherwise they would be installing the more efficient lithium ion batteries. Essentially heat storage is only good if most of what you use eventually is in heat, otherwise you trip over round trip in-efficiencies.

So far this installation is the largest of its kind, but in early October a $140 million molten salt storage project had its investment agreement signed in Jiangsu, the province just north of Shanghai.

We have often said that the world needs to solve the matter of thermal storage, as urgently as energy storage, because any energy transition will require sources of industrial and in northern climes, district heating systems. China may well be stealing a march on the rest of the world in using renewables delivered over the grid, to initially create heat for industry, and then to storage it for a convenient time delay.

Does that mean molten salt thermal storage is a practical, cost-effective option to build in any location with consistent heat demand? One would assume not, given that today’s molten salt has a minimum operating temperature of around 220℃ right up to 565°C, depending no the salts which are used. This which makes its integration into a number of scenarios awkward.

A more optimistic view on molten salt outside of CSP has been published by the Solar Thermal Alliance, a Chinese industry association. One use it proposes is storage for municipal heating, where it notes that molten salt has higher energy density and there uses less space compared to water thermal storage. But the most interesting proposal, given its potential scale, is surely the idea of recovering more of the waste heat from the country’s iron and steel industries, using a flue gas / molten salt heat exchanger. At present there’s only steam turbines used to recover energy from these processes, with lower-temperature thermal energy mostly wasted.

Throughout the industrialized world many sources of industrial heat are used once only for their primary purpose and not transported or stored for later use and the energy transitions needs to see investors as mobilized by this market as it has been in battery chemistries.

China’s Solar Thermal Alliance comments conclude with the observation that molten-salt energy storage requires more research, for example into a broader range of operating temperatures, using different salts. In the meantime, the main thrust of the technology will continue to be in CSP power plants – and it’s surely only because of China’s recent development of a full-scale molten-salt CSP industry that we see any experimentation with the technology in other fields. This electricity-powered molten-salt unit in Zhejiang was built in the Tianshi Low-Carbon Industrial Park. The project is part of China’s state-led experimentation with a great range of green power technologies, most of which are destined to fall by the wayside.

There are also several Western companies investigating molten salt storage in the absence of CSP. One of these, Danish startup Hyme Energy, claims to have developed a molten salt variant 75% cheaper, and somewhat denser and less corrosive, than the mainstream formula. It proposes that its Molten Salts Storage (MOSS) design be integrated with North Sea wind power, photovoltaics and used to store het for municipal heating. The company plans to begin construction of a pilot project in summer 2023 in Esbjerg.

Germany’s MAN Energy on the other hand proposes retrofitting coal plants with molten salt so that heat from the thermal storage can drive existing steam turbines – an approach for which AES Andes, revealed a 560 MW, $450 million plan last month, for a coal plant in northern Chile. According the company, this would require 700 MW of electrical input to power, sourced from local renewables.

Another Western startup, the Thermal Battery Corporation, proposes 2,400-degree pumped liquid metal mixed with thermophotovoltaics – but that merits its own article sometime.