One of the most difficult tasks is to use renewable energy to decarbonise Australia’s industrial sector. One potential clean, renewable energy source is concentrated solar power or CSP systems. Australia needs to use solar concentrating electricity since it generates energy without releasing harmful greenhouse gasses. 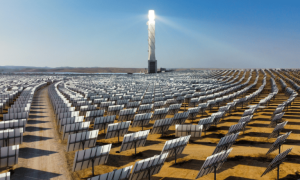 The solar power tower name comes from the fact that the concentrated solar power (CSP) is focused not at the focal point of each heliostat dish but at the top of a very tall vertical tower.

A solar power tower is called a ‘Central Tower’ or ‘Heliostat’ power plant. It is a kind of solar-operated plant that utilises a tower design to focus the sunlight on it. The mirrors focus the sunlight onto a central tower acting as the receiver in this case. Some early designed projects utilised water to directly generate steam, which ran a turbine, but now molten salts are employed.

How does a solar tower work?

Imagine a tiny magnifying glass that can concentrate a small amount of sunlight into a blazing beam. The heat could burn a little pile of dry leaves from this beam. This is essentially how a solar tower collects heat.

When sunlight shines down over the solar tower fields of Heliostats, each computer-controlled mirror measures its position at two axes. In heliostats, these beams focus the sunlight effectively at their transmitters, and upon arrival, they are directed in the direction of the receiver. The solar tower is built using solar ray energy to heat the water’s surface, and the resulting steam generates electricity.

The layout and positioning of the heliostat field is determined by the position of the solar tower itself and its geographic location. Heliostats nearest to the solar tower are the most efficient as the reflected sunlight has less distance to travel through the air. Also, the nearest heliostats are less prone to shading from their neighbouring heliostats but are affected by the tower. Being nearer, they also require less precise solar tracking of the sun.

The power of the reflected solar energy decreases with increasing distance, hence heliostats situated far from the solar tower are less effective. The outer heliostats must be situated farther apart from their neighbouring heliostats to prevent shading.

Additionally, they need extremely precise tracking mechanisms to maintain the exact position of the reflected sunlight on the tower.

Newer versions now use liquids and nitrate, including 40% calcium nitrate and 60% magnesium oxide. This salt has greater heat output than water, which makes some heat energy stored for heating the water which drives the turbines.

The cold tank stores the salt at 280℃and pumps it up to the top of the tower where it circulates through the receiver, where the salt’s temperature is taken to 565℃ and then piped back down to the hot storage tank.

The pre-heated liquid salt at a temperature of about 300℃ is pumped up the tower from a cold storage tank through the heat-absorbing central receiver where it is heated up to over 600℃ by the concentrated sunlight and then flows down the tower with the aid of gravity into a hot liquid storage tank for use later by the generating plant.

Solar towers are non-polluting, emission-free solar power plants that can run continuously for extended periods as long as they have a way to store the free heat energy that comes from the sun. The only emissions they produce are from scattered sunlight. Modern solar tower installations employ molten salt as one such storage media.

Solar towers can achieve higher efficiencies, up to 20%. They can be easily expanded by adding more heliostats than many other solar concentrating technologies, thereby reducing costs and providing reliable power for its customers over a long period. However, as a relatively new technology, solar towers currently produce electricity that costs more than electricity made with fossil fuels.

Towers powered by solar energy do have a lot of disadvantages, though. New access roads, electricity pylons, and surrounding heliostats must be built to connect the solar power generation facility to the national utility grid. These structures typically occupy much space in isolated desert sites with high sun exposure.

Additionally, the tower’s size, height, scattered sun reflection, and the nearby heliostat field may harm the local ecosystem and wildlife.

Some solar towers around the world

Solar panels exist across many nations. Solar towers should have flat surfaces, dry and windy. Operators of the plants need access to some water supplies – even to clean the hydrostatic systems. Areas where rainfall or snow occurs, should avoid it. Generally, the best result is many sunshine days or as much direct sunlight as possible. It is measured in terms of the sun’s Direct Normal Intensity (DNI) and is accessible via national renewable energy laboratories.

The PS10 Solar Power Plant (Spanish: Planta Solar 10) is the world’s first commercial concentrating solar power tower operating near Seville, in Andalusia, Spain. The 11 megawatt (MW) solar power tower produces electricity with 624 large movable mirrors called heliostats.[2] It took four years to build and so far has cost €35 million (US$46 million). PS10 produces about 23,400 megawatt-hours (MW·h) per year, for which it receives €271 (US$360) per MW·h under its power purchase agreement, equating to revenue of €6.3 million per year.PS20 has twice the PS10 output (20MW) with 1,255 two-axis sun-tracking heliostats, driving 120m² mirrors. These mirrors concentrate solar radiation onto the receiver on a 165m tower. The tower follows the same technology as that of PS10 for electricity generation.

Deep in the Nevada desert, halfway between Las Vegas and Reno, a lone white tower stands 195 meters tall, gleaming like a beacon. It is surrounded by more than 10,000 billboard-size mirrors focusing the sun’s rays on its tip. The Crescent Dunes concentrating solar power plant looks like an advanced communication device for aliens.

Crescent Dunes, the flagship project of Santa Monica–based firm SolarReserve, has achieved what engineers and proponents of renewable energy have struggled with for decades: providing cheap, commercial-scale, non–fossil fuel electricity even when winds are calm or the sun is not shining. The facility is touted as the first solar power plant to store more than 10 hours of electricity, which translates into 1,100 megawatt-hours, enough to power 75,000 homes.

Despite ongoing legal proceedings, federal loan defaults, numerous technical issues, a complicated bankruptcy, and the loss of its contracted client, a contentious $1 billion thermal solar facility in the Nevada desert is back in business.

The beleaguered 110-MW plant shut down in April 2019 after numerous unforeseen problems with its molten-salt tank that the plant’s operator, Tonopah Solar Energy, said constituted a force majeure.

The Sierra SunTower project is a solar power tower operating in Lancaster, California. This is the only operating plant in North America and occupies around 20 acres or 80,000m2 in the Mojave Desert. This system consists of 24,360- 1.136m2 heliostats, giving a net power capacity of 5.0 MW. Sierra was completed in 2009 by eSolar and sells its electricity to Southern California Edison (SCE) and can power more than 4,000 homes in California’s Antelope Valley.

A solar power tower solar thermal power plant called the Aurora Solar Thermal Power Project was intended to be built north of Port Augusta in South Australia. It was anticipated that after it was finished in 2020, it would produce 150 MW of power. The storage time would have been up to eight hours at maximum capacity. The yearly output of 495 GWh of electricity was anticipated from the facility. On Carriewerloo Station, it was supposed to be 30 kilometres (19 miles) north of Port Augusta.

The project was cancelled, according to an announcement made by South Australian Energy Minister Dan van Holst Pellekaan on April 5, 2019.

The Aurora project is currently under new ownership. A 140 MWh battery project was installed after 1414 Degrees acquired the project from SolarReserve many years ago. Vast Solar, an Australian CSP developer, bought 50% of the project.

Solar Tower has several environmental benefits. Unlike fossil fuels such as coal or natural gas, there are no pollutants from air or water pollution. The construction of the solar tower generates emissions like in a similar power station as a building. Materials need to move and be built; all require power typically in fossil fuel. The negative environmental impact is identical to that of other power plants, and various toxic materials have been produced by photovoltaic cells.

Energy Matters has a nationwide network of trusted local installers ready to provide you with up to 3 Free Solar Quotes. Complete our quick quiz and begin your solar journey today!