With the emergence of ‘renewable technologies’, many hope to reverse the impact of climate change, with initiatives such as the Mohammed BinRashid Al Maktoum Solar Park, located in the desert south of Dubai. It is the largest solar park in the world. It is equipped with millions of photovoltaic panels, capable of converting the sun’s rays at around 1,000 megawatts per hour and powering more than 320,000 homes, mostly owned by the Dubai Electricity and Water Authority (DEWA), The utility plans to double its energy production with its next phase of development, which includes the world’s tallest concentrated solar power tower. At about 260 meters high, about 60 meters shorter than the Eiffel Tower, it will use about 70,000 heliostats to convert the sun’s rays into thermal energy and store it for about 15 hours Created in 2013, the park is expected to reach its fifth and final phase of development in the next few months. two years. It is estimated that it will help offset 6.5 million tons of carbon emissions per year. Achieving this goal requires an investment strategy from the beginning, which begins with the creation of human capital. Could you tell me what investing in renewable technology is like? Is it just something cheap, or is there something else? Asks Euronews reporter Salim Essaid. 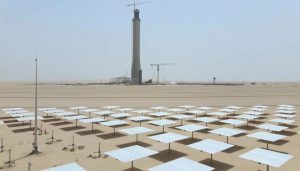 “When you educate young people from an early age, they are basically aware of what challenges solar is facing from now on, and how they can ultimately address those challenges,” says Aaesha Abdulla. Alnuaimi, director of the Center for Solar Innovation.

Speaking of what awaits youth in the future, what is the most difficult challenge you face in advancing renewable technology? Salim Essaid wants to know.

“Nowadays, if you look at how technology deals with dust, for example, there is robotic cleaning. But, its cost is high. There is also the anti-dirt coating based on nanotechnology. We have tried several of these options but, Unfortunately, none of them work effectively under adverse conditions. We therefore need more research and innovation in this regard, “says Aaesha Abdulla Alnuaimi.

Through practical solutions, such as trees from which photovoltaic leaves sprout or solar-powered streetlights, the city moves along the road less traveled. As Dubai bets on a more ‘solar’ and low-carbon future, the United Arab Emirates as a whole continues to rely heavily on traditional energy sources. Yet they are taking great strides to pave the way, through strategic investments. In 2019, the solar park provided 3% of Dubai’s total energy demand. Before that, the emirate was almost 100% dependent on natural gas. The UAE is still dependent on fossil fuels. However, the authorities intend to make greener changes with their unified “Energy Strategy 2050”, which seeks to reduce their carbon emissions by 70% from power generation. An objective that requires allowing greater investment, possibly foreign, to advance in the renewable energy sector.

“You have to deregulate the energy market and allow the participation of many players in the energy system. When they have permission, obviously, they will make investments,” says Jagannathan Ramaswamy, an independent energy and sustainability analyst.

In Dubai, DEWA has already attracted some € 9 billion in investment and public-private partnerships. In line with the 2015 Paris climate agreement, the emirates use a combination of solar, nuclear and other renewable energy. This will create a future need for ‘smarter’ technology to manage them.

“The mantra is decarbonization, decentralization and digitization. So, it is going to incorporate big data, data analytics, artificial intelligence and perhaps, blockchain technology,” adds Jagannathan Ramaswamy.

It is not yet known how this advanced technology will manage the ‘renewable societies’ of tomorrow. But, it is true that it is in the hands of the current ‘innovators of the future’.(Explica .co)