One of the first project-financed Concentrated Solar Power (CSP) with molten salt central receiver projects in the world is on track for a late 2023 commissioning.

Awarded to ACWA Power and SolarReserve in 2015 under South Africa’s REIPPP programme bid window 3.5 – which was specifically created for CSP projects – the Redstone Concentrated Solar Power Project will produce 480,000MW of clean energy annually. The project was signed in 2018 and started construction in May 2021.

At R11.6 billion ($162.457 million) total investment, the Redstone project near the town of Postmasburg in the Northern Cape is the largest renewable energy investment in South Africa to date. The plant should have an operational life of more than 30 years. With 12 hours of full-load energy storage, it will be able to reliably deliver a stable electricity supply to more than 200,000 households.

Redstone CSP has facilitated approximately R7 billion ($98 million) in foreign direct investment to fund and support the strategic energy transition goals of the country. ACWA Power’s co-shareholders in the project include the Central Energy Fund, Pele Green Energy and the local community.

US-based solar power company Brightsource Energy has appointed The Timken Company as the provider of advanced precision drives for the Redstone Solar Thermal Power Project in the Northern Cape.

Timken’s solar-tracking technology, developed by its Cone Drive business, will properly position the Redstone project’s heliostat mirrors to reflect the sun’s rays. The CSP facility will store the thermal energy it collects in molten salt and then convert it to electricity for delivery day or night.

Kurt Gamelin, Cone Drive president said they have been working side-by-side with solar power providers and developers to create innovative technology and solutions. “These close partnerships lead to enhanced performances, extended product life and reliable operations for the customers we serve.”

The other project awarded under bid window 3.5 was Kathu CSP Park in the Kalahari Desert which officially launched in 2019. It feeds 100MW into the national grid, using parabolic trough technology and supplies 179,000 households. 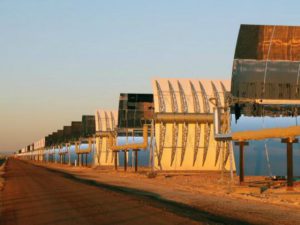 Serving as the most readily accessible source of energy in South Africa, solar power offers an ideal opportunity for the country to reduce its reliance on fossil fuels while driving the energy transition.

Accordingly, technologies such as concentrated solar power (CSP) – which uses a mirror configuration to harness heat from the sun to drive steam turbines and produce thermal energy, frequently incorporating thermal energy storage systems, which store energy and allows the plant to continue electricity generation at night or when there is little sun – are taking off across the country.

Set to produce 480,000 MW of clean energy per year while offsetting approximately 440,000 tons of CO₂ emissions, the 100 MW Redstone Solar Thermal Power Project will supply up to 210,000 South African households with clean, reliable electricity following its commencement of operations at the end of 2023.

The CSP project will be situated near the town of Postmasburg in South Africa’s Northern Cape, adjacent to the province’s 75 MW Lesedi and 96 MW Jasper solar photovoltaic (PV) power projects, which will comprise the first combined solar CSP and PV projects in the world, boasting a total generating capacity of 271 MW. Equipped with a 12-hour thermal storage system, the project will be capable of delivering reliable electricity around the clock. Currently in the midst of its construction phase, the project has resulted in the creation of more than 2,000 temporary jobs and is expected to create approximately 100 permanent jobs during its operating period.

Situated in the Kalahari Desert in South Africa’s Northern Cape Province, the Kathu Solar Park is a 100 MW greenfield CSP project that currently supplies electricity to more than 179,000 households, offsetting approximately 6 million tons of CO₂ over 20 years. The project features a parabolic trough plant – comprising numerous curved-mirror parabolic reflectors – and is equipped with a molten salt storage system that permits 4.5 hours of thermal energy storage, which will enable the plant to produce electricity during peak demand periods after the sun has set. With construction having commenced in May 2016, leading to the creation of 500 temporary jobs, the plant became operational in 2019, resulting in 81 permanent jobs during the project’s operational phase.

Mitigating approximately 90,000 tons of CO2 emissions per year over the course of 20 years, the 100 MW Karoshoek Solar One Power Station will provide energy to over 100,000 South African households in the country’s Northern Cape Province. The CSP plant is equipped with 360,000 parabolic mirrors that track the sun’s movement with GPS technology and features a molten salt thermal storage facility that allows for five hours of energy storage. Karoshoek Solar One is located approximately 30km east of the city of Upington, an area of South Africa that is frequently described as one of the best places in the world to generate solar power.

The Xina Solar One Power Station is a 100 MW CSP plant located in the town of Pofadder in the Northern Cape Province of South Africa. Constructed between 2014 and 2016, the plant was officially commissioned in 2017 and provides approximately 400 GWh of sustainable energy to about 95,000 households while mitigating up to 348,000 tons of CO₂ per year. The plant uses parabolic trough technology and features a molten salt, thermal energy storage system with storage capacity of up to 5.5 hours.

The first CSP plant in South Africa to employ parabolic trough technology, the 100 MW KaXu Solar One CSP plant started operating in March 2015, following more than two years of construction. Translated to “open skies” in the region’s local Nama language, the KaXu Solar One plant is located 40km northeast of Pofadder and boasts an output capacity of 330 GWh per year, supplying clean energy to approximately 80,000 households while offsetting approximately 315,000 tons of CO₂ emissions per year. The project also features thermal storage capacity of three hours using a two-tank, indirect molten salt-based thermal energy storage system, which can provide five hours of electricity when there is no sun. The KaXu Solar One project creaated 4,500 jobs during its construction phase and 90 permanent jobs during operation.