Morocco’s 800 MW solar hybrid project at Midelt will be the first solar project in the world to include thermal (heat) storage of PV (Photovoltaic) as well as CSP (Concentrated Solar Power). Midelt’s first-of-a-kind hybrid solar and shared storage project will deliver dispatchable solar at 7 cents per kWh.

To date, when PV solar projects have included storage, they have only been paired with batteries. But at Midelt the solar energy from not just the CSP plant, but also from the PV plant will be, for the first time, stored in the thermal energy storage of the CSP portion of the project. CSP projects built today routinely include 10 or more hours of thermal energy storage in tanks of low cost molten salts.

MASEN Technical Director Abderrahim Jamrani told utilities and grid regulators at a forum on the grid value of CSP that MASEN’s choice of CSP at the Noor I, II and III plants was made at a time when Morocco was paying up to 30 cents per kWh for fuel oil electricity. The nation of 36 million needs five hours of power after dark and is on track to meet its target to have 52% renewable electricity by 2030.

Originally the plan for Midelt was to include PV for daytime with a little battery backup for transient daytime needs and for the CSP to include five hours of thermal storage to cover the evening peak. But as PV prices dropped, the storage plan changed.

“If we limit the number of storage hours, batteries can win. But in our studies we find we need also CSP to complete the mix, as we need five hours after dark,” Jamrani said. “The cost of PV was declining so fast that now a share in the thermal energy storage of CSP will also come from PV.”

The Moroccan project marks the first time that the PV in a hybrid solar project with CSP will also charge the thermal energy storage incorporated in the CSP power block.

TSK Flagsol technical director Mark Schmitz described the approach his firm proposes for Midelt: “The CSP and PV are combined, so the two can act independently, each feeding to the grid, but we can also integrate them both and connect the two, by means of an electric heater,” he said.

“So the parabolic trough plant is able to deliver temperatures of about 400 °C before the heat transfer fluid reaches its limits. However, the solar salts in the thermal storage tank can take higher temperatures, and also the steam turbine loves more temperature, so we applied a concept developed a couple of years ago of taking excess power from the PV and putting it into the thermal storage.”

The operating temperature of parabolic trough CSP is limited by the heat transfer fluid circulating through its solar field. Normally, the resulting temperature of the thermal storage is at an even slightly lower level (How CSP’s thermal energy storage works). But this limit can be overcome by electrically heating the molten salts, which can take temperatures up to around 565 °C, before feeding them into the storage tank.

This idea of colocating PV and CSP and sharing the CSP thermal storage is one that Schmitz believes will be widely applicable as energy grids become more saturated with renewables, not just Morocco’s, and as therefor more regulators move from lowest cost to “best fit” procurement.

“If you are operating a grid which is still mostly based on carbon, then merely replacing as many kilowatt hours as you can with green energy is what you do; you just dump the PV in as much as you can. But at a certain point you will reach a level where there is just too much PV in the grid during sunny hours,” he said.

“So the idea was instead of just dumping this energy, just feed it into the already existing tanks with the CSP. So now we can turn on the turbine and we can exactly feed into the grid what is missing at the time when it is missing.”

Morocco’s clean energy agency MASEN is executing a national renewable policy with an eye on how a future grid can operate reliably with dispatchable firm electricity from 100% renewables. 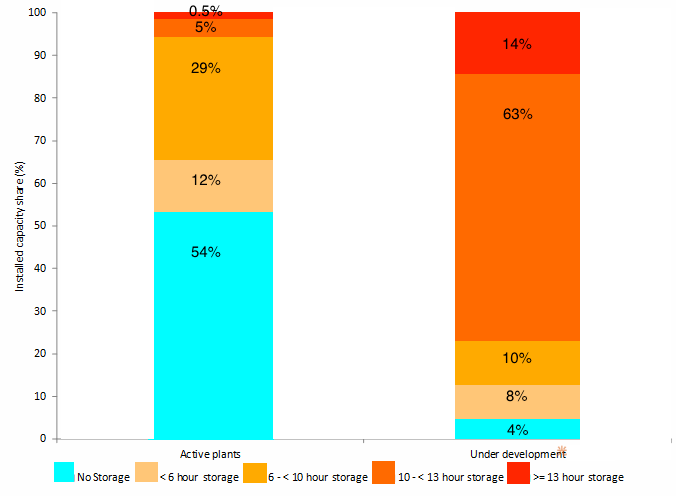 “If we imagined our energy all coming from renewables – even 10 years ago we could not have imagined it,” Jamrani commented. “And as we are making our studies for 2050 we now can see that we can really achieve 100% renewable in our country.”

The Midelt hybrid solar project will be one quarter state owned, by Morocco’s energy agency MASEN, with the remaining three quarters owned by a consortium comprising EDF EN (35%), Masdar (30%), and Green of Africa (10%). Masdar itself is also government-owned as a strategic government initiative by Abu Dhabi to invest, incubate and grow a renewable energy industry domestically and in other nations.(by:Susan Kraemer, solarpaces.org)