The Advantages to Develop Concentrated Solar Power with Storage in China

China’s energy resource endowment is dominated by coal. Along with the «double carbon» goal, the demand for low carbon energy production and consumption has become more and more urgent. 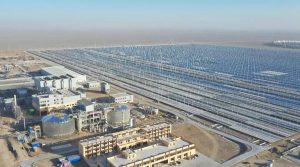 However, as the utilization rate of new energy increases, the marginal cost of consuming new energy will increase rapidly, and the economics of regulating power sources such as BESS is difficult to guarantee. Northern Shaanxi is rich in solar and wind resources, and is an important area to help Shaanxi achieve low-carbon transformation of electricity, and the power grid in northern Shaanxi has a high proportion of new energy power, and high DC transmission scale. To ensure the safe and stable operation of the grid has become the key.

CSP with Storage is a grid-friendly new energy technology. Compared with wind power and photovoltaic power generation, it has the advantages of controllable power output and rotational inertia support for the system; compared with thermal power, it has the technical advantages of clean primary energy and more flexible peak regulation performance; compared with battery storage, it has the technical advantages of higher safety and longer energy storage duration. Therefore, the development of CSP with Storage is conducive to alleviating the contradiction between large-scale grid-connected consumption of new energy and safe and stable operation of power system. In the context of «double carbon», the development of solar thermal power plants is one of the ways to promote large-scale new energy consumption.

At present, the main reason why the development of CSP is limited is the high investment cost. According to the information of CSP plants that have been (to be) put into operation, the current investment per unit capacity of CSP plants is 6 to 10 times PV plants. As technology progresses and the scale of construction increases, the investment cost of solar thermal power plants will gradually decline.

By the end of 2020, the installed capacity of operational CSP is 520MW, and 1.11 GW under construction now. It is expected that the domestic installed capacity of operational CSP plants can exceed 1GW in two years and reach 10GW in the next 5 to 10 years. Referring to the relationship between the scale and investment of PV development, it is expected that by 2030, China’s CSP cost can drop by about 40%. At that time, the technical and economic benefits of CSP with Storage will be more obvious when considering its advantages in ensuring the safety and stability of the power grid.

Multi-effort to help the development of CSP with Storage

Northwest China and the Tibet Autonomous Region are rich in solar resources, and have good conditions for the development of solar thermal power plants because of their vast territory and relatively sparse population. Relevant policies also provide good development opportunities for the development of solar thermal and energy storage. From the perspective of grid demand, according to the «14th Five-Year Plan», the northwest region and the Tibet Autonomous Region are important national energy bases, and are «west-east power transmission» continuous transmission areas, and will also build a number of ultra-high voltage DC transmission channels; under the relevant national requirements. DC operation requires CSP with Storage to play an important role in peak regulation, frequency regulation and voltage regulation.

At this stage, CSP with Storage is still in the early stage of development, and it is recommended that supporting policies be introduced to promote the development of China’s solar thermal industry.